How best to handle Bad Beats 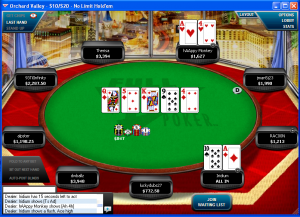 If you’ve hit one of the outs on the river and you’re so close to claiming the big stack it’s a thrill and the feeling that makes poker one of the best cards games to play. After having such a high rush it sucks to be hit with a bad beat.

Anyone who has been playing the game for a long period of time will be able to relate to that feeling.: you’ve put down a larger pile of chips into the middle of the table and experienced that moment of liberation when the person who has called you turns over the worst kind of hand that’ll double your stack with no issues.

In a moments notice the two outs he had to play arrive on the table and you’re sitting there wondering how the game went so wrong so quickly.

Regrettably bad beats come with the game and it’s apart of gambling. Clearly you don’t want to see that large pike of chips you have earned going to that player who got themselves a lucky hand by chance. It doesn’t meant that player should be overlooked, Quiet often the way a player reacts to a bad beat will show just how strong that person is as a player.

You have to acknowledge that these things occur in the game. You need to train yourself to learn the proper ways to setback the bad beat and contemplate on winning all your chips back. If you cannot concentrate on the winning hands your not going to effectively be able to play the game. This’ll cause you to go on the tilt and make it that much more difficult to win the chips you have lost back.

Granted, putting a bad beat in the past is not as easy as it sounds. So here’s an article to give you a few tips and tricks to make yourself attentive and on the right path to gaining all your chips back.

Now keep in mind that talking about your bad beat won’t get you anywhere. Everybody has their bad beat stories, No one wants to hear about how unfortunate luck has hit other players other then themselves. Consider it an unspoken rule in poker.

So what does this mean for you? It’s unfortunate but it means that you must get over the problem yourself, which is where the following guidelines if you will become useful … I’ve had my own fair share of bad beats and these guidelines work great and I trust them for what they are.

1. Just don’t sit there and think on the situation that just occurred. Take your time to think (Roughly one minute works good for me) and do what you must to get that bad beat out of your mind and system. Whatever your person release of anger might be do it, Be it you want to scream at your computer screen or yell at your opponent in the game. The fact of the matter is you need to release that tension. Do not do this at a live casino because you will be thrown out before the next hand is deal. Instead get up and go for a short walk, go have a smoke, put some quick coin in closest slot … or if you find a buddy hanging out somewhere, go and have a quick talk with them. After your mind has been cleared of the hand you had earlier, go back to the table with a clear mind and get ready to play the cards again.

2. Have confidence in how you play. You might have lost some of your chips to a bad beat but you really players the hand right. You appeared to have the best hand at the table at the time, had all your chips in the middle of the table and your going steady. Your fellow players at the table has been playing the cards horribly and has shown he is an average player at best, These are the times when you can earn all your chips and some back.

3. Play in a poker game that presents a bad beat jackpot, this way if you might lose and you get beat you will be compensated for your loss.